Odyssey of the Mind

The Greenwich Alliance for Education sponsors scholarships for students needing financial assistance who are interested in participating in Greenwich Odyssey of the Mind.

For the past three years, students at Hamilton Avenue School have had the opportunity to participate in Odyssey of the Mind. Students learn to cooperate and respect the ideas of others, and to evaluate ideas and make decisions on their own. They gain greater self-confidence and increased self-esteem through their hard work. In addition, they work within a budget, so they learn to manage their money. Most importantly, they see that there is often more than one way to solve a problem, and that sometimes the process is more important than the end result.

After their 2nd Place finish in the State Finals they were determined to go to the World Finals at Michigan State University. This required raising $7500 to pay for their flights, lodging, transportation of the props, t-shirts, food and more – AND they did it. Students held bakes sales and posted a Go Fund Me page that created so much buzz and excitement that donations just rolled right in.

Greenwich Odyssey of the Mind is interested in expanding the program to more schools within the Greenwich community. Expansion will let more students participate and will create a greater presence from Greenwich in the State competition.

Odyssey of the Mind is an international educational program that provides creative problem-solving opportunities for students from kindergarten through college. Team members apply their creativity to solve problems that range from building mechanical devices to presenting their own interpretation of literary classics. They then bring their solutions to competition on the local, state, and World level. Thousands of teams from throughout the U.S and from about 25 other countries participate in the program.

Teams of 5-7 select one of five “Long-Term Problems” to solve from September – March, which they then bring to the annual state-wide competition in March to compete against other teams within their age division who have chosen the same problem. Each year, five new and unique “Long-Term Problems” are announced, one within each of the problem categories: Vehicle, Technical, Balsa Wood Structure, Classics (Shakespeare), and General Performance. Within each of these problems, students perform a skit, while they are also fulfilling scoring elements of costumes, mechanical devices, etc.

Teams also compete within two additional areas at the tournament: “Style,” which is a team’s unique qualities or flare within their “Long-Term Problem,” and “Spontaneous,” a challenge they only receive upon walking into the room, which can utilize verbal creativity, hands-on creativity, or both.

Within each division and problem, the top two teams are given awards and go on to compete at the international competition, “Worlds,” which take place annually in May at either Iowa State or Michigan State University.

The Odyssey of the Mind team from Hamilton Avenue School placed 2nd at State Finals on March 16, 2019 which qualified the team to attend the World Finals in Michigan in late May. 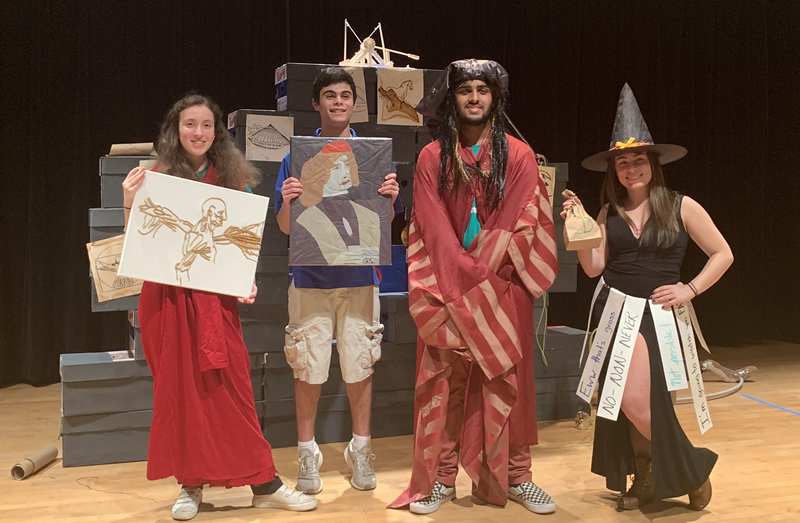